World War 1 is a unit I love covering with older classes. There’s so much you can delve into, and the kids generally don’t know as much about it as they do about World War II.

You can download free, editable plans (sorry, coming soon!) that I use to cover this topic here, and read on for loads of lesson ideas, videos and other resources.

One other thing to mention – I use this interactive booklet when covering WWI. It’s probably the best resource I’ve ever bought, and for $5, I can’t recommend it enough. There’s a lot of cutting involved at the start, but it’s very easy to complete after that, and the kids love both the novelty, of it, and the break from researching, designing and presenting projects.

It seems to make sense to start with the causes of the War. You can start by discrediting the idea that Franz Ferdinand being shot was the sole cause of the war. Write the MAIN causes (militarism, alliances, imperialism, nationalism) on the board and get the kids to discuss each word with a partner – what do you think they mean? You could type up a paragraph or two on each cause, and give them to small groups, to put into their own words, and present them to the class. Another nice idea I’ve seen is to draw a firework, sectioned off into M,A,I and N, and then add a picture of Franz Ferdinand as the ‘spark’ that set the firework off.

Explain that the War was essentially fought between two sides – the Allied Powers and the Central Powers. Do the kids know which countries fought together or against each other? Use two different coloured Post-it notes on a large map of the world to show the countries involved.

A Timeline of Major Events and Battles 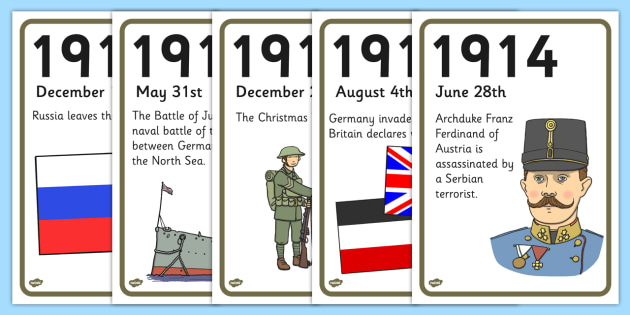 Life as a Soldier in the Trenches

Recreating life in a trench is one of those memorable moments for a kid that they will remember for the rest of the year. You can incorporate so much learning into this five minutes of madness by improvising with classroom objects – e.g. hats can become gas masks, the metre stick a rifle, rolled up balls of paper can be hand grenades, and over turned desks can become trenches. Set up a no-man’s land, shout ‘Over the Top’, have someone roll in in a tank – the sky’s the limit on this one!

Afterwards, you can make tea-stained letters from a soldier (write the letter, then ‘paint’ it with teabags that have soaked in hot water). If you’re musically inclined, consider singing ‘Silent Night’ in both German and English, which was supposedly (though perhaps rather romantically), supposed to have happened during the Christmas Day Truce of 1945.

The Role of Women during the War

The girls in the class love this one! Women played a much more active role in World War I then we credit them for, and the first half of this video does a good job of explaining how. You could have the kids role play some of the various tasks women undertook, and maybe even write a short script to go alongside them.

The Treaty of Versailles

This video does a great job of explaining what happened at the end of the War, and you can lead it into a really interesting discussion about the hard deal Germany was dealt, and how this lead to the rise of Hitler, the Nazi Party, and World War II. This would make for an interesting debate on how the Allied Powers should have acted after the War!

So there you go – a pretty detailed breakdown of how I approach teaching World War I to fifth or sixth class. There is quite a lot in it and it will take a full month of at least one hour lesson a week.

Please let me know if you enjoyed this longer post – I tried to include as many ideas and resources as possible. Finish off your unit with this Kahoot Quiz, or challenge your students with this WWI crossword.

I hope you got some value from this, and thanks for reading!